You probably have heard about Cosmic Crisp.  It is a new variety of apple that will soon be popping up in just about every major grocery store.  At its launch this winter it will ship millions of bushels, and be supported by millions of dollars of advertising.  You will be told that it is an improvement on its parent: Honeycrisp. 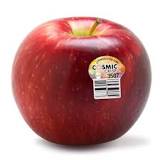 What you won’t be told is that your local orchard can’t grow it.

Not because it won’t grow in this climate, and not because we wouldn’t like to plant it.  The reason we can’t grow it here is that we are legally prevented from planting it.  Cosmic Crisp was developed in Washington State, and the fruit growers there have maintained exclusive rights to plant and market Cosmic Crisp.  No one outside the state is allowed to grow it.

This is just the latest example of a trend that has been developing over the last decade.  You’ve probably heard of Jazz, Kiku, SweeTango, Opal, SnapDragon, or Evercrisp, There are about 30 varieties of apples now that are not freely available for growers to plant.  They are protected by “clubs”, patents, marketing arrangements, and other methods designed by lawyers to maintain close ownership of the varieties.  As a mid-Atlantic grower, I can buy my way into some of these arrangements if I like, but other clubs are completely closed to me: like Cosmic Crisp.  (There is a great article from NPR on this topic here.  The situation has only worsened since it was written.)

This close control is intended to ensure quality, limit supply, provide funds for investment in development and marketing, and to provide an aura of exclusivity.  But it carries an incredible risk for growers, because of this I am certain: there is not enough shelf space at the grocery to carry all of these varieties, and all of those varieties will be competing against each other.

The number one risk in growing apples is not weather, not disease, not insects, and not labor.  The number one long-term risk for apples is price collapse because of lack of demand for the variety.  The timeline for apple maturity is so long, the capital establishment expense so high, and the variable cost of production so great that only a high price for a high yield over a long period will justify the planting.  Yields and longevity can be managed, but wholesale prices cannot.

Ironically, the apple suffering the most from this onslaught of new varieties provides a template for how growers should be approaching the future.  Red Delicious became popular not because it was the best tasting variety, but because a critical mass of growers in the Northeast got together and decided that the hundreds (literally) of varieties that they were trying to sell could not possibly be managed in the marketplace.  Red Delicious was pretty, grew well across climates, and tasted good enough that everybody could make money on it as long as they stuck together.

It won’t take long for everyone (except Washington State) to realize this impending cliff, and the Red Delicious-inspired solution.  I suspect that sometime in the near future, the walls will come tumbling down as the marketing czars realize that they don’t have the critical mass to compete with Washington State, which produces most of the apples sold in the US.  The supply-side market will determine which new varieties will win.  And growers stuck with the wrong varieties may very well end up broke.

As for me, I will grow a few of these new varieties when I can.  They ALL taste great, and will be a welcome addition in our farm market to compliment some of the old varieties that continue to stand up well: like Cameo, Stayman, Jonagold, and Macoun.