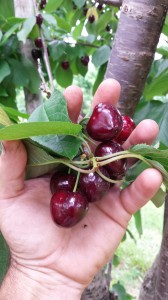 I was once asked by a customer why cherries are so expensive.

The answer is pretty simple: blame it on our East Coast weather.  The last three years are a perfect example.  In 2013 and 2014, tough winters and light freezes during bloom combined to shrink the crop to about 20-30% of what would be considered a full crop.  This year, the crop had a huge “set”; that is, there was a very large bloom and almost of all of the blossoms produced a fruit.  All of the cherry orchards were amazed by how many cherries they saw.  I considered it to be a double or even triple crop.

Then in May we saw no rain.  For about six weeks from bloom until very late May, we received about 1/10 of an inch of rain.  The trees were heavy with cherries that couldn’t size because the leaves weren’t powering the tree because the leaves couldn’t grow because there was just too much load on the tree for the amount of water they were receiving.  All the cherry growers were in a panic that their crops would be dime-sized.

The we had the wettest June in history.  Literally.  Baltimore broke a record, and Harrisburg recorded their 8th wettest June (and we had about 15% more rain than Harrisburg).  Moreover, the rain was continuous throughout the month with not a single observation of two dry consecutive days.  (I’m pretty sure about that – our weather station broke down with all the rain.)

If there is one thing cherries don’t like, besides hail, it is wet weather.  It was a huge challenge to keep them from splitting and rotting in the fields.  Like it or not, the only way to save a crop like this is to apply fungicides to prevent them from rotting in the trees.  Only the very best and safest fungicides can be used for this.  These are also some of the most expensive chemicals sold.  Retail price: $800/gallon.

Adding insult to injury, we’ve been trying to establish new cherry trees to replace our aging orchard.  Our biggest challenge has been trying to grow them in the presence of an ever-expanding deer herd.  We’ve tried scents, plastic bags, expensive repellants and nothing seems to work.  Deer love to browse on cherries and really nothing will stop them.  Many of my two-year-old trees look no larger than when they were planted and some have been killed by the damage.

For the most part, growers in the Northwest don’t have to worry about these problems.  They grow their cherries in a desert climate far from the woods, and irrigate them from the huge water projects and hydro-electric dams that were paid for with federal tax dollars.  Yes, they can produce quality cherries at a low cost.  But in the end, we were able to size our crop, keep most of them from splitting and rotting, and produced a great crop that was enjoyed by many of our neighbors and customers.

So I think it is worth the effort to grow cherries…  but don’t think for a minute that it is easy, or will be cheap.